I know that it’s confusing. It is one thing to question the official story, and another thing entirely to make wild accusations, or insinuate that I’m a superhero.
– Tony Stark

I was recently asked about my use of the phrase ‘alter ego’ to describe Twist. Do I see ‘her’ as being somehow separate and distinct from ‘me’? Well, yes and no…

This is a topic I’ve touched on a few times already (the most in-depth blog entry can be found here).

Part of it comes from being treated differently, depending on whether I’m dressed as myself or Twist. The way I behave will inevitably be a reaction to other people’s reactions, and this will vary as people perceive me as a man, woman (at first glance), or cross-dresser.

What about self-generated differences?

The first thing to repeat is that while I call Twist ‘her’ and ‘she’, I don’t feel or act ‘feminine’ when I’m dressed up. It’s purely cosmetic. I’m a man in a skirt.

I’ve recently written about Twist coming from the extroverted aspects of my personality; this is only natural, as I don’t sit about at home cross-dressed – if I’m all dressed up, it’s because I’ve got some place to go.

I’ve also mentioned my pet theory that for some, cross-dressing isn’t necessarily about looking feminine; it’s about looking young. Since then, I’ve decided it’s more about feeling young. For me, I occasionally (just occasionally) like to scare myself by taking myself out of my comfort zone – where I have no idea if what I’m doing is going to work, but I’m going to give it a damn good go regardless. Something about it reminds me of the feeling of being younger, when you’re unpractised, unsure, and anything you do can result in success and failure. Going out in public cross-dressed can give me that feeling, as long as it doesn’t become routine.

These reasons all stem from specific behaviours or situations; it doesn’t really get to personality, or what some might refer to as a ‘second soul’. I’m more of a sceptical, pro-scientific mindset, and I’m not keen on trying to describe things in terms of ‘souls’ or ‘spirits‘ – they’re a little too vague for my tastes, and I find them generally unhelpful to meaningful discussion. Unfortunately for me, much of what has been written on this subject comes from psychoanalysis (akin to literary criticism/interpretation of human beings) rather than psychology (you know; actual science).

I never wanted to be Marilyn – it just happened. Marilyn’s like a veil I wear over Norma Jeane.
– Marilyn Monroe

Psychotherapist Dr John Rowan claims that we all have a number of sub-personalities with which we interact in different social situations, and our personality is the sum of all of them together. I could see how this can help describe the experience of cross-dressing, but the idea basically comes down to reacting in different ways to different situations. We’ll behave differently in front of an office boss, at a party, at a funeral, or waiting in line at an airport; are these really different sub-personalities? I’m not entirely convinced.

I’ve taken a variety of personality tests (such as this one, or one based on Facebook posts) trying to answer the questions differently, as both ‘myself’ and ‘Twist’, but in terms of personality and political views, we’re pretty much identical, with the exception that Twist is marginally more extroverted – but I knew that anyway.

So this rather reduces me to saying that I am Twist; Twist is me. We are not separate, but we are distinct. If I use the term ‘alter ego’, I mean it not in the psychoanalytic sense of ‘multiple personalities’ (now known as a dissociative identity disorder), nor an actor playing a role (although that certainly comes into it, to a degree). Neither would I refer to a (un-)hidden ‘double life’ in the style of Batman or Superman.

Perhaps calling Twist an avatar might be appropriate (in the 21st century sense of the way you can present yourself on-screen, rather than as the physical embodiment of a Hindu deity; I can be arrogant, but not that arrogant!).

The best illustration of what I mean by Twist as an alter ego would be Tony Stark/Iron Man. He’s got the same personality in or out of the metal suit, but he operates in a very different mode when it’s on. What a gold/titanium alloy exoskeleton does for him, a skirt does for me. But then, I’m working to a much tighter budget.

Now if there’s a top-secret organisation of superheroes out there looking to recruit me, just give me a call. I’ve got the initiative, requisite catsuit, and everything…. 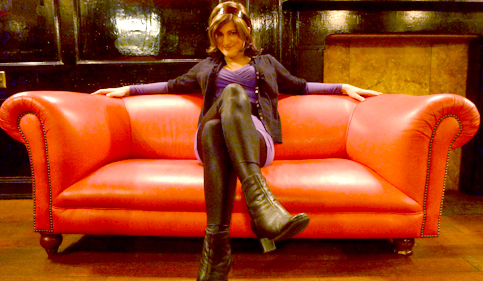 On the couch: analyse this….