So, more than six months have gone by and I haven’t added anything new. In my defence, it’s because I’ve been having an epic year. Really.
I’ve been out cross-dressed more often this year (so far) than in all previous years put together. (Which is a lot.) How did this happen?

I put it down to my friends. I’m incredibly fortunate to have a girlfriend and two largely separate social circles who all support and encourage me. The fact that I live in quite a liberal city with frequent arts festivals means that most strangers I might pass in the street probably wouldn’t give two shits about the fact that I’m a guy in a skirt (the Ladyboys of Bangkok have been visiting annually since the 1990s; I guess everyone’s pretty used to the concept).

So what have I been up to? I’ve been doing talks and introducing shows. It’s good to have a reason to crossdress (the reason being, “I’m going out and I’ll have a captive audience”). I’ve been out and about in Newcastle en femme, I’ve been out socialising with friends (starting with a meal out in January at which I was obliged to wear a red Star Trek dress).

I’ve also been doing photoshoots with my girlfriend. One of my friends suggested I do a 2013 calendar. The thought festered, and I asked my girlfriend if she’d be willing to get up at sparrowfart to take pictures. She agreed. Consequently, I’ve been: dressed like a bunny girl on a daffodil-filled roundabout at 7am (slowing down the local traffic a bit); asked to leave the back of a cinema and a water treatment facility whilst wearing a catsuit and toy guns at 5.30am; and I’ve waded in the sea at a 4.30am sunrise in a polka-dot swimsuit.

It’s not over yet. I’ve been invited to model dresses at a fashion show/sale for a local shop in October. It started when another friend suggested I contact the owner a few months back. We met; we talked, she couldn’t figure out how to use me as a model. We friended on Facebook and she saw the photos I’ve been taking. I guess she decided she could take the risk.

It’s taken a long time to get to this stage – being confident enough to say yes to these things. But there’s something else at play too.

I’m not getting any younger.

So I’ll keep doing this for as long as I feel young(ish) and pretty. But the clock is ticking. As much as I might fervently believe in Germaine Greer’s dictum, “You’re only young once, but you can be immature forever”, I have no idea how much longer I’ll be going out as Twist.

Until my alter ego’s retirement (or, more likely, her mystery disappearance) – carpe diem! 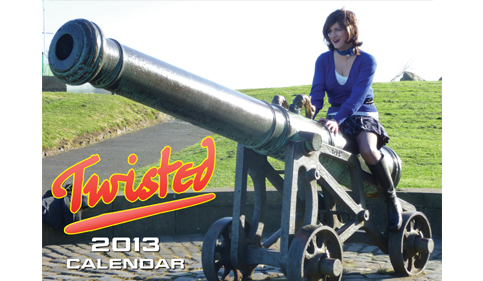