Regular readers of this blog will know that I’m deeply shallow and vain and a show-off. In anyone else, this is considered a virtue and called ‘confidence’. Read this as you will, but it takes confidence to prance about cross-dressed in a swimsuit…

I wanted to do some beach photos for the calendars I made for my friends. I wanted them to look sporty, or glamourous, or a bit retro. Only two things stood in my way: a lack of swimsuits, and no idea where to go.

Procuring swimsuits was easy enough; cheap supermarket ones would do. There was no way I could pull off a bikini (by which I mean wear one confidently), so I found a terrifically ugly one-piece polka-dot affair, one with a magenta stripe, and cheapest of all, a simple black number. Surely, even without the benefit of Spanx, one of them would work out? (In the end, I found a use for all three.)

Choosing a location was a different problem. I wanted something on the east coast partly because of proximity, but also to get a sunrise shot – even if, at the latitude on which I live (further north than Moscow), a summer sunrise occurs at 4.30am.

It took a few weekends consulting Google Maps and driving around to some bleak, desolate, rocky coves that would only interest geological field trips, but I homed in on Tyne Sands near the town of Dunbar. Then I had to make sure the skies would be clear… and I decided to check the tides for good measure. These weren’t just swimsuit photos; I was going to science the shit out of this. 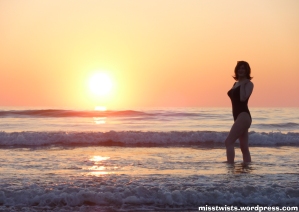 For the sake of glamour, let’s pretend this was taken somewhere warm and tropical… 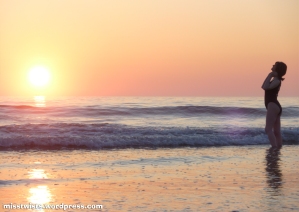 Just a few weeks after standing at a local roundabout dressed as a bunny girl, I found myself taking off my clothes on a freezing cold deserted beach in the pre-dawn light at about 4.20am. I should get my head examined.

The first plunge into the water was agony; you won’t see any photos of that. But after a few minutes, I got used to it. And then the sun broke, a deep red. Even here, there was something incredibly life-affirming about staring at the sun as it crept over the same waves that were lapping around my knees.

Still, I wasn’t here to have fun. I tried to remember to suck in my gut, and pose properly, but I couldn’t exactly splash back to the sand and check the photos my girlfriend was taking, and then splash back for some more. A lot of it was down to just hoping for the best (in retrospect, I wish I’d gone a little bit further into the waves).

So much for the sporty shots. I changed into the polka-dot affair, and had to tuck my bra-straps into my bra in order to wear the halterneck properly. If the crew of the two distant fishing boats happened to be up and awake and looking at the beach through binoculars, then maybe they’d’ve freaked out. But I’m pretty sure they weren’t.

If modelling involves putting on a look of studied indifference, then …I’m still practising…

The purpose of the next set was to go for the retro/glam look. I’d already sketched out poses and ideas for all of these, so it was just a case of finding a suitable stretch of beach. Happily, the sun was at just the right angle and direction to provide a good, golden light. I brought props: a beach towel; an empty wine bottle and glass; a can of Red Bull to make do for the wine; and a book (Backwards In High Heels if you must know) – all to cultivate the impression that I’m a classy fucker, me.

(That’s Red Bull in that glass…)

If you get up early enough, you can have a summer beach all to yourself… 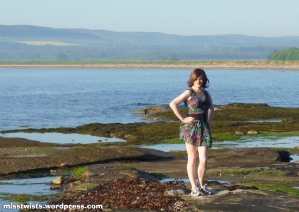 I love this dress; it’s great for making quick changes…

I had one more swimsuit and one more set of photos in mind. I wanted to do a set of astrology-themed pictures, and decided that sitting in a rockpool with a toy crab would work for ‘Cancer’ (in the end, the toy crab turned out to be too small and washed out in the sunlight, so I pulled a funny face and Photoshopped one in, instead).

The rocks were on the other side of the river, so we had to pile into the car, drive around, park next to camper vans full of slumbering surfers, and head through a patch of forest to the river mouth. The tide was far enough out to pose on the rocks and seaweed for a bit (for some reason, it didn’t feel like I was in Scotland any more; it also felt like I was on a mini-holiday).

On the way back home, we stopped at the small town of Haddington and got a few green, leafy shots by the river and the church (it was still early enough that nobody was about).

Obviously, I’m not going to share absolutely all the photos that were taken – but if you ever want to feel glammed up and have a beach to yourself, then first thing after sunrise on a summer morning is the time to do it. 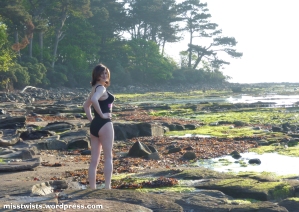 On the rocks with a Twist?

And yes, the sand got EVERYWHERE.

Gender-neutral toilets already exist. Every home has one, (unless there are two and the ladies and gents of the house retire to different ones?). And anyone classed as ‘disabled’ might also feel that they’ve been de-sexed as well, since the wheelchair sign applies to mode of transport rather than genitalia.

Even so, when I go out cross-dressed I plan ahead a bit. I try not to eat or drink too much beforehand, to minimise any trips to the smallest room in the building. It can also depend on what I’ve chosen to wear for the evening; sometimes there might be a bit of structural engineering works to undo before I can -you know- do anything.

I like to have some idea of where I’m going – ideally, does it have a disabled toilet? I can justify this on the grounds that when cross-dressed, biology and presentation cancel each other out, making me gender-neutral. Also, if I can’t run in heels, breathe in a corset, or eat big meals (it might wreck my makeup), I’ll pretend that they all count as a disabilities.

Sometimes, I don’t have that option. As always, I think I have it easier than anyone who’s transitioning (and at the mercy of short-sighted local laws when caught short). I identify as a guy; I’m a bloke; a dude (but I refuse to think of myself as ‘manly’); it’s just that I’m wearing a skirt. So I’ll use the gents’ toilets, thank you.

These situations are where I get all brazen (I won’t say ‘cocky’…). At a restaurant with friends, I went to the gents to fix my lipstick after the meal. A guy walked in after me and immediately went into Embarrassed Brit Mode (imagine a young Hugh Grant doing his flustered-and-stuttering routine).

Gent: “Oh, christ! I’m terribly sorry! I thought this was the gents!”

Mind you, there was another meal where I attended in a red Star Trek dress, and it took about thirty seconds to convince the diners who came in after me that they were actually in the right toilet. I think the trick is to take advantage of the awkwardness and be proactive with it. If someone else feels awkward, that doesn’t mean you have to as well. You can’t show weakness when you look fabulous.

On the other hand, if I’m in a pub setting where I haven’t been before, and there isn’t a disabled toilet, I can either nurse my drinks very slowly, or rely on the goodwill of female friends to check the coast is clear in the ladies’ toilets (that’s happened before as well).

If any readers live in a jurisdiction where toilets have somehow become sexualised, I dearly hope things change soon. Apart from death and taxes, needing to have a pee is something else none of us can escape from, and I see no reason why this should be made difficult for anyone.

The best solution I’ve seen is this: