For a long, looong time I wasn’t sure about sharing these photos, but I reached the point where I figured ‘what the hell’…

I must be nuts to dress up like this.
Speaking of nuts – don’t ask.

When scouting for locations for photoshoots for a calendar I was making for friends in 2012, I cast my search far and wide. One of these early springtime searches took us to the coastal town of Dunbar, which has a couple of roundabouts on the approach.

When we drove past, I noticed one of them was chock-full of daffodils, and surrounded by trees. The cogs started going round.

I already had a vague idea for an Easter-themed set of photos. Maybe, just maybe, I could do some tongue-firmly-in-cheek Easter Bunny shots?

I already had a bunch of clothes that could be repurposed as a bunny girl costume. I just needed the ears (from a dirt-cheap party shop), and maybe a chocolate egg as a prop (the supermarkets had nothing else). I ended up getting a small, handheld wicker basket from a charity shop to put eggs into, as well. It’s all about the details.

…because the eggs are what everyone’s going to look at, obviously.

All I needed was a location. And to lose a load of flab. (I got kind of paranoid about the latter, virtually starving myself and getting the most merciless body-shaping underwear I could acquire on a budget.) There are a ton of photos showing rolls of flab spilling over the body-shaping stuff which will never see the light of day, because I am vain.

The only other thing to do was hope like hell the weather would be good early in the morning at weekends, for as long as the daffodils lasted.

I can’t remember if it was the following weekend, or the weekend after, but after checking a nearby place to park on Google Earth and resigning myself to the fact that the morning sun wouldn’t be in the best position lighting-wise, we ended up at this roundabout again at 7am on the first Saturday morning of April.

…because bunnies are renowned for… uh, laying eggs…

This should be enough to tell you that 1) I get some really daft ideas and follow them through from time to time, and 2) I have the most understanding fiancée in the world.

It was damp and cloudy and not too warm. The daffodils were cold and wet with dew. I put down a rug and took off my coat and stood in the middle of a roundabout dressed as a bunny girl and asked aloud, “What the fuck am I doing? Seriously, who does this?!”

It took a while to get into the right mood for it. A few initial shots to see what the lighting and framing was like, but also to get the right posture and expression (“the tits are real, but the smile is fake” and all that…) 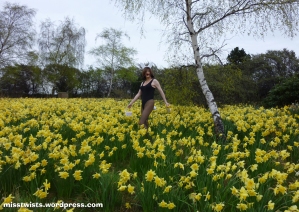 In the middle of one of these poses, an early-morning bus rolled past. As you might imagine, all the passengers suddenly pressed their faces against the windows to check out the bunny girl in the fishnets standing next to the road. I waved at them. I like to think I enlivened their journey into town, anyway.

Okay. No problem. Time was marching on, and the roads were going to get busier. Hopefully we wouldn’t take much longer.

A few more photos later, a car passed by and honked the horn. I think the driver liked my tail. He actually drove around a second time with his window wound down, and shouted “You look lovely!!!”

I can make it twitch, too.

I didn’t dare shout back, in case he lost control of his car. His journey was certainly brightened up.

More photos. I have this thing about checking the ones which have been taken to see if any need to be retaken. I mean, there’s no point in taking all those photos, only to find a bunch of things wrong with them when you get back home, right?

My audition for the Playboy mansion did not go well.

And that’s when I noticed, in the distance, a police car heading straight for us.

I immediately dropped down and hid among the daffodils, my mind racing, thinking of potential upcoming newspaper articles about the weirdo tranny bunnygirl at a Dunbar roundabout, with my mugshot right next to them. The police car kept coming. How would I explain this? I wasn’t breaking any laws, surely? Would I get fired from my job? What the hell would my friends and family say if it hit the papers?

Her ladyship decided this was hilarious, and a photo should be taken for posterity:

Bunny in the headlights

And then, at the last possible turning, the patrol car headed off in a different direction. I breathed a massive sigh of relief. I damn near laid a few rabbit pellets right there.

I decided that three vehicles passing by was too busy for my tastes. We finished off and headed home. This was the first time I’d gone out cross-dressed just to take photos, rather than to meet with friends. Maybe it was the adrenaline rush, but I really enjoyed it; it was like a quick mini-adventure. I got hooked.

This Easter Egg was gone in sixty seconds…

As for the location we were actually scouting in the first place? I’ll talk about that another time… 😉