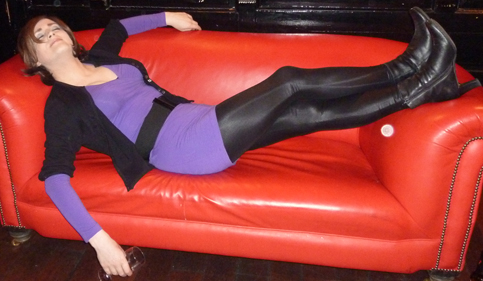 Back onto the couch for more psychology…

“I think we’re getting into a weird area here.”
~ Bill Murray, Tootsie

If you’re a guy with an urge to wear girly clothes, you might want to ask yourself what you hope to get out of it.  This can really help put things in perspective. Not comfortable being seen as male? Doing it for a laugh? Sexual thrills? Or just because the clothes look cool? Will you do go out in public, or keep it private? It’s worth thinking about these things before you get hung up on practicalities.

All sorts of things compel us to choose the clothes we do. Having addressed some of the external (legal, social and cultural) aspects, it’s time to look at the internal (psychological) ones. I did address this in one of my first blog posts here, but I think it’s worth expanding upon.

The 1993 CIA report mentioned in that post made heavy use of the pioneering work of Virginia Prince and Peter Bentler from the 1960s and 1970s. While you might reasonably ask if decades-old studies are still valid, a more recent follow-up (Docter and Prince, 1997) found similar results. A bigger concern is the fact that many respondents to their surveys came from support communities; a self-selecting sample which would skew the results.

Cross-dressing, for whatever reason, is not a sign of mental illness. The threats to mental wellbeing come instead from the ignorance and prejudice of other people. According to Prince & Bentler, 76% have never sought a psychiatric consultation for any reason, but the Docter & Prince study said 45% have.

Drag may or may not have come from an acronym of ‘DRess As a Girl’, and while the term usually refers to performers dressing up in a feminine way (whether exaggerated or not) for entertainment, Prince referred specifically to homosexual men who dress up as women, either for entertainment, or to discreetly pick up men for sex in places where overt homosexuality is not tolerated.

Whether a cross-dresser considers themselves ‘transsexual’ or ‘transgender’ can involve a whole host of factors, including but not limited to: feeling that the sex of their body doesn’t match the sex of their brain; being happy with their body but wanting to interact with the world in the manner their culture associates with the opposite gender; wanting to blend elements of ‘masculine’ and ‘feminine’ presentation; not feeling that binary definitions of sex or gender are appropriate to them; and so on.

Prince found the most important factors in a long-term, stable, cross-dressing lifestyle are:

Neither age nor experience as a cross-dresser correlated with cross-gender identity.

This is Prince’s term for a ‘lover of the feminine’, representing the 87% of cross-dressers who are heterosexual males who like to dress up from time to time. Even within this group, there can be a number of reasons for it, but the definition applies only to those who are interested in the ‘feminine gender role’ and not ‘her sexual activity’.

Among the potential reasons for ‘femmiphilic’ cross-dressing are:

It would be short-sighted not to acknowledge one of our biggest primal urges. With respect to cross-dressing, there are two major sexual reasons for it:

As a footnote, it’s worth mentioning a little curiosity. A report from 2002 noted that a 72-year-old man was treated with the drug selegiline, and he developed a frequent impulse to wear women’s clothing. He didn’t act on this impulse until his wife died over a year later, and went on to cross-dress about once per week. He stated he had never thought of cross-dressing previously. When the selegiline was stopped, so did his urge to wear women’s clothing.

As the report says,

A biologic basis for transvestism, and paraphilias in general, is not known. Rare clues emerge from cases similar to this one.

From the earliest posts, this blog has looked at the psychology of cross-dressing…