Expressing an early desire to do cheesy secret agent poses. Or something.

I’m trying something new for the blog.

Instead of sticking so many piccies on Facebook, where only friends could see them, I’m going to add more to the gallery here.

I thought I’d add extra posts to say a little bit about some of the photoshoots I’ve done.

One of the first was in 2010 for Edinburgh Skeptics.

At that point, I was the sole feminine face in the group (things have improved since then!), and got together with the others one evening in May to take pictures of us in the city centre, mucking about around the statues of local enlightenment philosophers David Hume and Adam Smith.

This was still an early-ish outing for me as Twist, and hadn’t quite pinned down my ‘look’ or really gotten to grips with makeup.

If philosopher David Hume knew people would rub the toe of his statue for luck, he’d turn in his grave…

It also meant walking through crowds of office workers on their way home – but I’d already jumped that hurdle two or three times, so I wasn’t nearly so nervous about it.

However, up to this point, I’d only ever dressed to blend in. I hadn’t really tried to draw attention to myself. (Well… ehm… not that much…)

Standing around striking silly poses in public in broad daylight was  kind of new.

It was also the first time the guys had seen me as Twist. Rather flatteringly, they didn’t recognise me at first. (Nor did their girlfriends, when they turned up; but they did say that I looked the part, which was the main thing.) 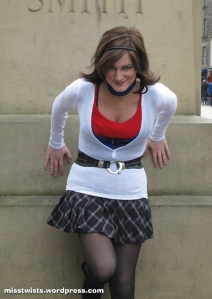 Footsore from high heels? Find something to lean on…

I got honked at by a couple of passing cars. I suppose I should’ve been offended or upset by this, but I was actually quite flattered. If I was honk-worthy (that is so a phrase! And it might sound rude, but it isn’t. Not in my head, anyway…), then I must’ve been doing something right.

We ended up filming short, improvised sketches (presumably in the hope they’d go viral; thankfully they never did). One featured the camera panning up yours truly, and me saying ‘Don’t trust your eyes! Be skeptical!” which turned into a catchphrase for us during our run at the Edinburgh Festival Fringe. (Every time I see it, a little bit of me dies inside.)

But for me, it was just great to be out in public, mucking around with friends, and finding some sort of purpose for dressing up.

As some of my friends later remarked, I seem to have developed a sixth sense for cameras in a room, and instantly start posing and mugging. This is where it began, I guess… 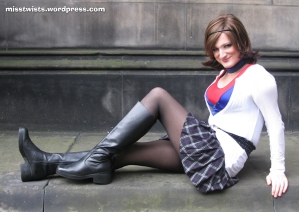 How short is that skirt?! …just short enough.