It’s been a lot longer than intended since my last blog post, but my outings this year have been of a purely social nature; no adventures; no grand photoshoots; nothing to report (at least, not yet…).

I usually do my longer more serious, introspective posts (which always give me the stomach-turning feeling that they’ll start up a shitstorm) at the end of the year.

2017 has certainly provided a bit of food for thought in the wake of this year’s eruption of sexual harassment scandals (ranging from rape and other sex acts, to unwanted physical contact, to verbal harassment), going back decades.

I could easily add my name to the #metoo hashtag (if I used Twitter), but I’d have to add it to a #I_am_hardly_blameless_myself hashtag as well.

#I_am_hardly_blameless_myself
To put it briefly, learning to socialise was a steep catch-up learning curve in my first year at university, and I found myself socially ostracised more than once because I had no idea what I was doing wrong (but I certainly knew that I was doing something wrong). Maybe I had a toxic personality; maybe it was extreme social immaturity. Whatever it was, if I could go back in time, I’d happily strangle my 17-year-old self and damn the time paradoxes.

Have I ever creeped women out? For certain (I had enough self-awareness to realise that my teenage attempts at flirting were about as welcome as being chatted up by Gollum). Have I ever said inappropriate things? Yes (thankfully I was able to channel these impulses into improv comedy instead). Have I ever touched a woman inappropriately? I’m sure I probably did – but I’m also sure that was the extent of it, though. It’s not like I was a rampant sex pest in the style of Pepé Le Pew; just an annoying teenage shit.

On meeting up with one of my university friends a couple of years back, she assured me that whatever I said or did (that had me twitching and gibbering to myself years or decades later with embarrassing memories) “At least you apologised.”

What changed? I learnt not to be a dick, through a process of trial and error, I guess. A year or two of solo travelling helped as well – going around the world with nothing more than you can physically carry means you have to sharpen your social skills pretty damn quick. I’d say I was in my early-to-mid-twenties before I was an acceptably functioning member of civilised society.

What about #metoo then?
It was also at university that I started crossdressing, and I’ve already written about the great fun I had.

But there were plenty of moments when guys – and it was only the guys – creeped me out: trying to lift my skirt at parties (several times – what were they hoping to see?); inviting me to sit on their laps (certainly not, if it’s going to feel like you have three knees); once asking if I ‘wanted to be fucked like a bitch’ (by a total stranger at a party – I assume he’s had a lifetime of going home alone at night); grabbed from behind and dry humped (three occasions); and then, of course, there was the whole ‘if a man is dressed as a woman then it must be funny’ thing to get over. I prefer to dwell on the good stuff that happened instead (all of these were in the late 1990s, so pre-Twist days).

More recently, however, sometimes people (men, women, or otherwise) grab or touch Twist (or ask bizarre questions) and I either don’t mind at all, or I don’t let it bother me.

Sometimes it’s just curiosity (“Are those tits real?” *poke* – “Would you really have done that if you thought they were?”); sometimes it’s just for fun (I tried very hard not to dissolve into giggles whilst being motorboated at a party once); hugs and touches are perfectly okay too (I’m not much of a huggy-touchy person myself but I won’t ever turn them down).

Some things are okay when I feel safe and it’s among friends. As for how other people might react to those same things, your mileage may vary. 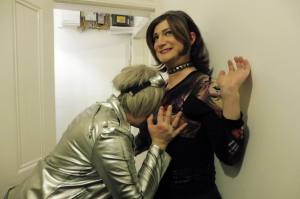 This was bloody funny actually. 😀

So, is there anything I can conclude?
I can only speak for myself here: feeling sexually harassed was something I felt more acutely when I was younger, and more unsure of myself, and low-status. And it only ever happened when I was cross-dressed, so – and it’s important to note this – it’s not like I had to face this sort of thing all the time.

These days, as Twist, I’m a big girl and I can take a lot, and I’d let someone know if they’d gone too far.

What’s my take on all the sexual harassment scandals? These are only my current thoughts, and they may or may not change (and bear in mind that explanations are not excuses):

Also: I’m really fucking glad I went through my teens before social media was invented.

I have a few Twist things planned for 2018 (if I can summon up the courage), and I still have a backlog of photos to add to the gallery.