Why yes, I always type up my blog dressed like this… don’t you?

So it’s been three years since I started writing this blog. The first year was largely bereft of entries, because (I told myself) I was too busy actually cross-dressing to write about it. In reality I was just too damn lazy to put finger to keyboard. The second year was a process of getting into a routine and figuring out what I wanted to write about. Last year, I finally worked out how blogging’s supposed to work, tagging articles and connecting with other people.

So, it’s been a very slow, gentle learning curve that’s fed into other blogs I’ve started. It’s paying off – I’m gobsmacked at the global reach, and also at the ever-increasing monthly views. I’m also amused and bemused by the search terms that bring people here: “crossdressed in public“, “crossdress meme“, “crossdresser with big tits” and a whole host of search terms I won’t repeat (I don’t want to encourage them!), which I assume were typed in with one hand… (I can only imagine their disappointment when getting here). (Update 26/3/15: My new favourite search term to find this blog is “like cross dressing grave yard workers they dug in their heels”…)

Making contact with other people’s blogs (usually through seeing the links visitors have on their own blogs) has been pretty interesting. Every cross-dresser has their own story, or their own motivation, or their own challenges to write about. I think the most profound impact has been the realisation that the way we present ourselves online, and the things we say, can affect people for better – and I’ll follow this up in my next entry.

One of my inspirations was the blog of a cross-dresser called Becky EnVérité (now only available through the Internet Archive). Becky wrote from 2005-2010 before getting married and starting a family; life happened, priorities changed. But the way she regarded cross-dressing kinda chimed with the way I did: it’s part of my life, but maybe not the most important part; I don’t think I’ll be doing it forever, but I don’t want to draw a line under it; and -most importantly- no matter what else, I want to have fun with it while it lasts.

I cannot stress enough how important this is. Sure, it might be nerve-wracking and filled with uncertainty when you start out, but if you think it’ll turn out to be fun, do it.

So Becky’s blog was winding down at about the same time my cross-dressing was revving up. In many ways, I’d like to thank Becky for the inspiration – and also because she was part of a group trying to make cross-dressing more socially acceptable, and therefore easier for the likes of me to come along, years later.

So, this blog has mutated into my way of ‘paying it forward‘.

I like to think that if anyone reads what I say, or looks at the pictures of me mucking about having adventures in a skirt, and decides “That looks like fun! I want to try that!” then I’ve succeeded.

Maybe, someday, they’ll have their own adventures in cross-dressing, blog about it, and inspire someone else?

Back in 2013 I did a talk for Edinburgh Skeptics on how astrology works (spoiler: it doesn’t). So what better way to kick off a new year than by casting your horoscope for the next twelve months? (Actually, there are plenty, but what the hell.) Rather than use the system of twelve signs we’re familiar with (which dates back to about 600BC), I’ll use the zodiac as it actually appears today… 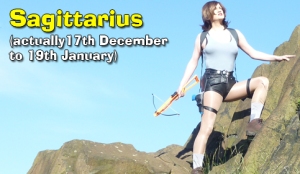 If you decide to go out en femme this year for crying out loud don’t forget your keys. Getting home will seem a bit of an adventure at first until you realise you aren’t really in control of much. 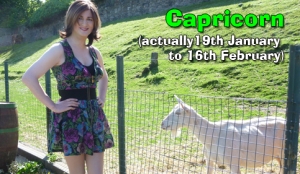 You’ll need something a damn sight stronger than water to get that makeup off your face! Whatever you use, try not to turn up at work looking like a panda. 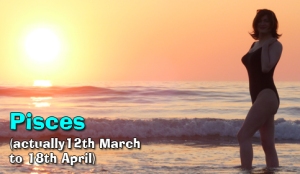 Depending on when and where you go out this year, you may end up cold and extremely wet. Unless that’s what you’re hoping for, in which case, party on! 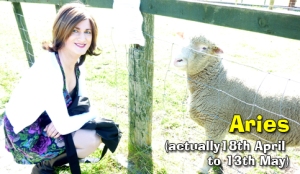 Wool could be a good fabric for this year; so don’t underestimate it. Especially if you’ve stolen it from another mammal. Oh, wait…

Someone may have a beef with the way you dress. They may milk it for all it’s worth. Ignore them; they’re just cattle. 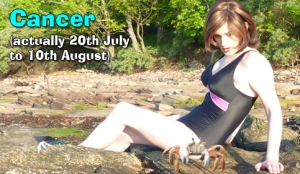 Tell yourself that this is the year you come out of your shell. Expand your wardrobe! Be adventurous! And try not to wear too-tight clothes that pinch.

Lion liars and the lies they tell?

If someone thinks you’re being deceitful by cross-dressing, tell them you’re not lyin’, this is part of who you truly are. Don’t take it lyin’ down! 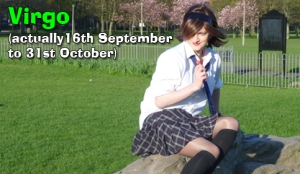 This year you will do something for the very first time. You’ll be nervous, but exhilarated when it’s done. (And get your mind out of the gutter.)

Don’t shove too much padding into one half of your bra. Achieve balance in all things, as always. 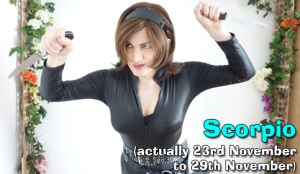 Sting in the tale?

Watch out! At some point this year, some legless reptile may try to plunge his head between your tits…

In the meantime, if none of those horoscopes sound appealing, you could try this one instead (click to embiggen):