You’re never too old to scare yourself. And if you ever want a safe place to go out cross-dressed, I thoroughly recommend comic/science fiction conventions. These are two things I found out for myself last month.

I had it in my head to enter the cosplay contest at Edinburgh Comic Con 2016, but I wasn’t entirely sure which character to dress up as. So I asked my friends. Three costumes involved the catsuit: Emma Peel from The Avengers TV show (but I reckoned hardly anyone would be able to distinguish her); Selene from Underworld (but I needed a much shinier catsuit to do her justice); and Black Widow from The Avengers films (but if videos and photos of the 2015 con were anything to go by, I’d be up against dozens of Black Widows). That left Tomb Raider‘s Lara Croft (the 1990s version).

I’ve already gone out as Lara for a friend’s birthday, as well as an early-morning photoshoot (which was largely uneventful, so nothing to write about; photos can be found randomly throughout the blog gallery), but going to a comic con would be my first time just on my own, talking to a bunch of strangers (although I did meet quite a few people I knew anyway).

A couple of Rogue Ones?

On arrival, I headed to the ‘green room’ where cosplayers could get changed. The first guy I spoke to was Andrew, getting changed from Bane to a shadow stormtrooper. He was my guide and guru to my first con. He also didn’t realise I was a guy as well, at first. When I caught up with him throughout the afternoon, he’d introduce me to various friends to speak to, so I could confirm for them that he wasn’t lying; Lara Croft was a dude. This was actually great fun! 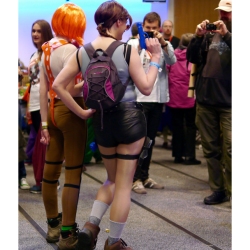 Covered from all angles (I think Leeloo was glad to escape and check out the rest of the con after this!)

Some of the reactions were priceless – one of my favourites was a guy who, after taking my photo, said “Thanks” and I said “You’re welcome!” …and then his eyes bugged out a bit.
“You’re a man?!”
“Well, yeah, sure.”
“Uh…”
(And then he left in a hurry. I’ve encountered this response before.)

That said, pretty much everyone else was cool with it…

I gotta be honest; I don’t recognise this character… my nerdy knowledge has limits! 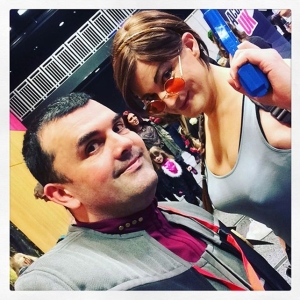 This was an incredibly safe, family-friendly environment. There were parents and kids all in costume (kudos to the very young girl dressed as the dancing sapling Groot from Guardians Of The Galaxy). The rules for interacting with cosplayers (essentially: look don’t touch; no photos without permission; don’t be a dick) were displayed on large pop-up stands, but I think everyone just took them as read. Everyone took pictures of themselves with everyone else. It doesn’t matter what size, shape, age, or gender anyone is – it’s all about the costumes.

It was kinda weird seeing so many different genre characters mingling together… shopping. It’s the ultimate mix of the fantastical and the mundane.

Anyway, time was marching on and the cosplayers had to queue up for the contest. As I predicted, I saw a multitude of Black Widows (and Suicide Squads, and X-Men), but apparently a glut of Deadpools the previous day had deterred anyone from dressing up in red and black.

It was a long, nerve-wracking wait. I’d never competed in anything like this before (and had no expectation of winning; I was merely hoping to be remembered), and those nad-mashing leather shorts were really, truly uncomfortable (but Lara Croft does not cry; therefore neither would I).

After The Flash and Wolverine did their turns on stage, I was up. As the write-up of the con in Starburst magazine put it:

I seemed to create an impression anyway. Someone in the midst of the audience said:

A good number of folks were surprised when he spoke I do have to say. I saw the reaction of two teenage boys when [Lara] spoke and it was priceless.

I’m told there was a massive intake of breath from some quarters. On stage, I was just aware of a short pause and then applause. The facial tectonics of the emcee were a sight to behold as well, as he rapidly reappraised who he was dealing with. 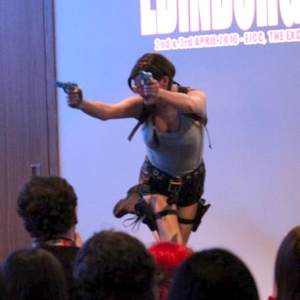 “Don’t just stand there, let’s get to it; strike a pose, there’s nothing to it…”

“So what made you dress up as Lara Croft?” Hm. Yeah. What indeed? In retrospect I wish I could’ve come up with a wittier answer than the one I did (I could’ve mentioned the fact that like Lara Croft I have a habit of digging around for old things – apart from a clip-on ponytail, everything I wore came from charity shops, and was perhaps the cheapest costume at the con).

I’d also given thought to a short performance of how Lara picks something off the floor (shuffling around left and right until she’s finally in the right position, and then inexplicably drowning), but it’s hard to know if others will find it as funny as I do. So I limited myself to a final pose for the cameras before bounding off stage.

By the end, the well-deserving winner was a home-made Chappie. I understand a video of the contest might be available at some point – I’ll post it here if I can. I’ve already had a suggestion for a costume for next year’s comic con which some of my friends are keen on. And you know what? I’m tempted. It’ll take a lot of dieting and buying stuff I’d wear precisely once, but I’m tempted… sort of… kind of… maybe….